The same complex and unusual geology that underpins much of the landform and botanical diversity of the proposed reserve area has also long been of interest to the mining industry. Indeed, it was mining – gold initially, and then copper – that powered the establishment of Ravensthorpe as a town (see history below). However, despite this, very little mining activity has taken place in the proposed reserve, and the significance of mining enterprises in the district has been patchy at best.

Detailed maps produced by the Geological Survey of Western Australia show a band of former mines running in an arc from north of the town to the east and south-east, along the western fringe of the Ravensthorpe Range. The historic townsites of Desmond / Elverdton and Kundip owe their brief existence to this activity. Almost without exception, this mineralisation lies east of the Hopetoun Road – and therefore outside the proposed reserve area.

As best as can be ascertained from this mapping, there may have been less than a handful of historic mine sites within the reserve. This suggests that despite suggestions that the area is “minerally prospective” history has shown that such exploration as has occurred has not produced results worth pursuing. However, there is now a “new” mineral of interest – and that is lithium. It is exploration for this mistakenly-labelled “rare earth” that has sparked the campaign to conserve the Cocanarup – Kundip area. See below for details.

Further, the whole of the proposed reserve area is covered by either existing or pending exploration tenements, as is shown on the map below. This suggests that despite the unproductive history of past exploration the area remains of interest to mining companies – and therefore under potential threat. Only the declaration of a Class A Reserve (Nature Reserve or National Park) can alleviate this threat in the long term. 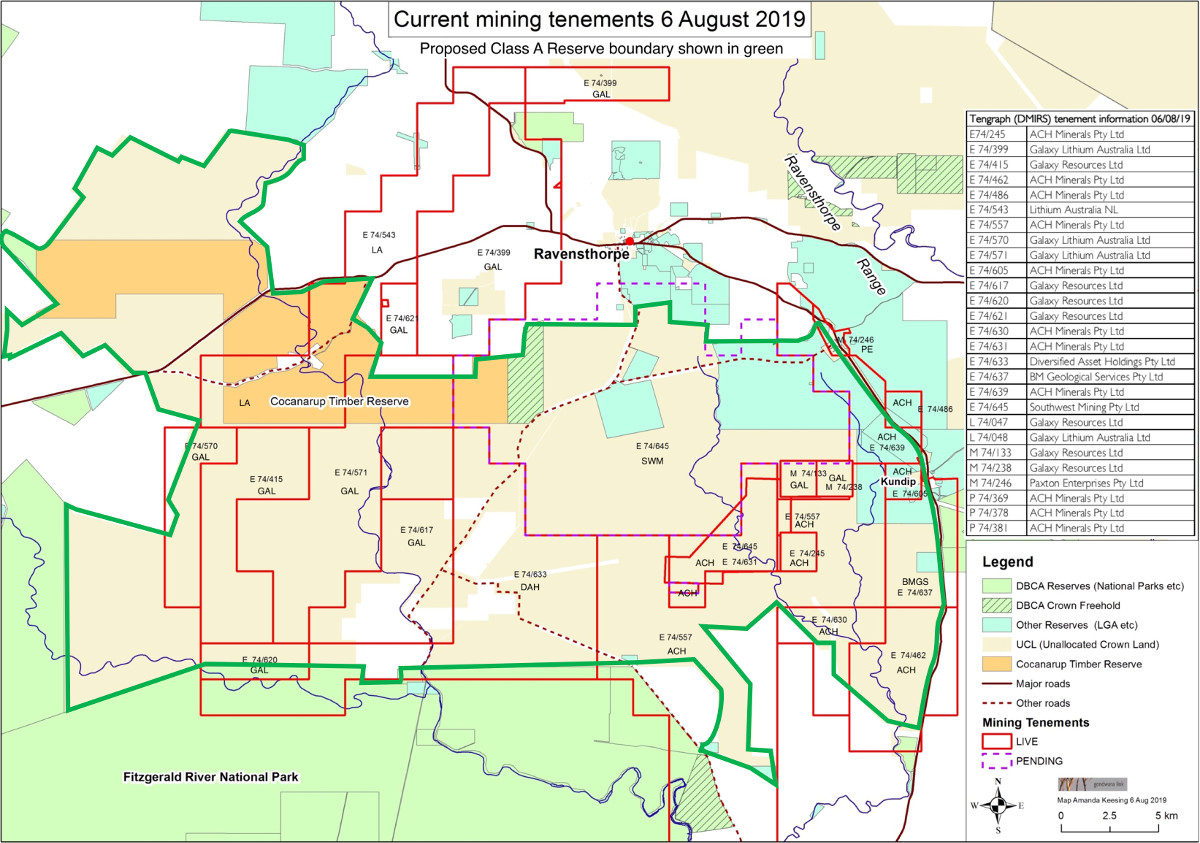 The Cocanarup – Kundip bushland is currently largely intact, with very few access tracks, and therefore still supports a diverse range of naturally functioning and (currently) resilient ecosystems which are not yet represented in the conservation estate. Further, the area is currently almost completely dieback free, with only one known small infestation in its 65,000 hectares. Retaining this status is crucial to its long-term conservation value.

But the threats are real, and potentially both significant and imminent:

While we appreciate that our submission will take some time to be considered by government, we are concerned that the time this may take could put at risk one of the greatest attributes of this landscape: its unusual and crucial intactness. Given this, it is vital that we continue to press for some form of interim protection for the area while our proposal is being considered – and this remains a priority activity for CCA and its members and supporters.

In the era of rechargeable batteries, lithium has become a highly sought-after mineral, and something of a boom in exploration and mining of this product has occurred in the last 5 years or so. Indeed, Western Australia is a major world supplier, primarily from a massive open-cut mine near Greenbushes. Chile and Argentina also have huge resources, and are increasingly competitive suppliers.

Ravensthorpe has its own lithium mine, the Mt Cattlin operation owned by Galaxy Resources. This lies just 2 km north-west of town, and is currently undergoing an expansion (in 2019), bringing both benefits and challenges for the local community. An image of this mine’s proximity to town can be seen below. 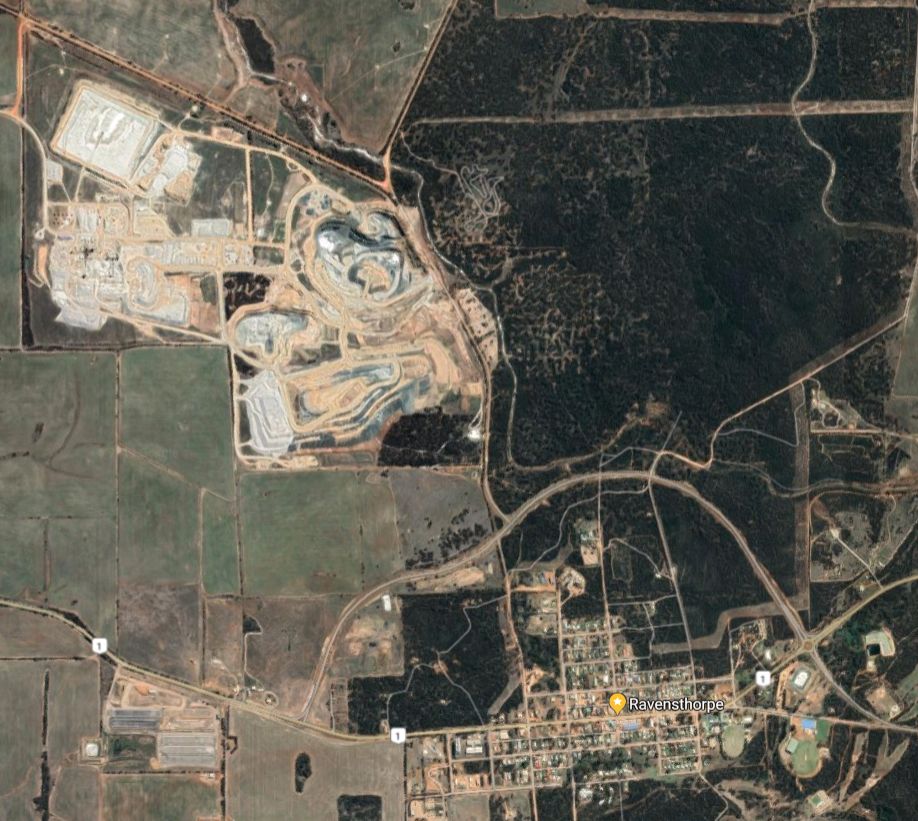 Notwithstanding the “darling” status of lithium in the eyes of politicians, the future for this mineral (in June 2019) could be said to be uncertain at best:

Despite this, the Cocanarup Conservation Alliance Inc. recognises the role mining plays in the fabric of Western Australia:

In summary, it is not mining as such that is the issue – it is where it takes place.

In 2016 three clearing permits were issued for exploration works in the Cocanarup Timber Reserve – two to Lithium Australia and one to Kingston Resources (on a tenement subsequently purchased by Galaxy Resources). Exploration activity was then undertaken in the first half of 2017. The two primary sites of activity are known as Horseshoe and Deep Purple, and can be seen on the annotated satellite image below. 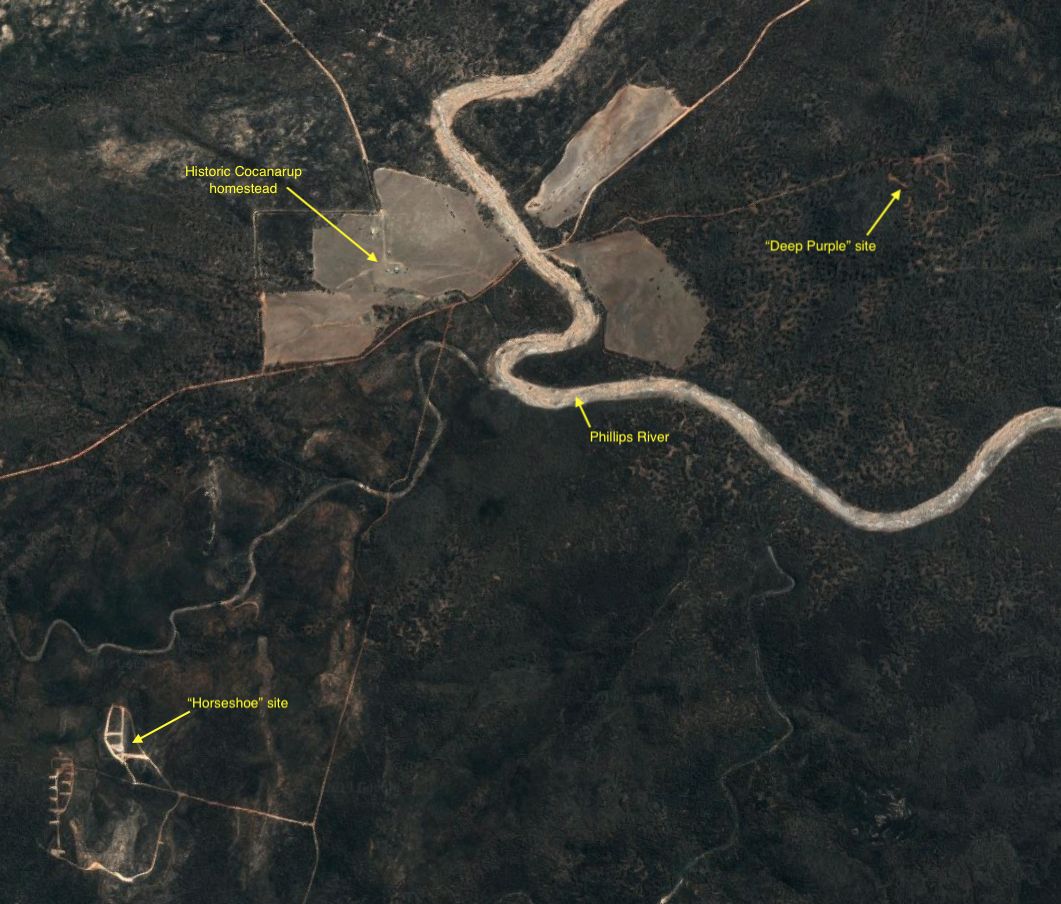 One site, “Horseshoe”, is south of the Cocanarup homestead in mixed mallee vegetation. This was what is known as a “bulk sampling site” – and the scale of the on-ground impact is clear to see in the images below. 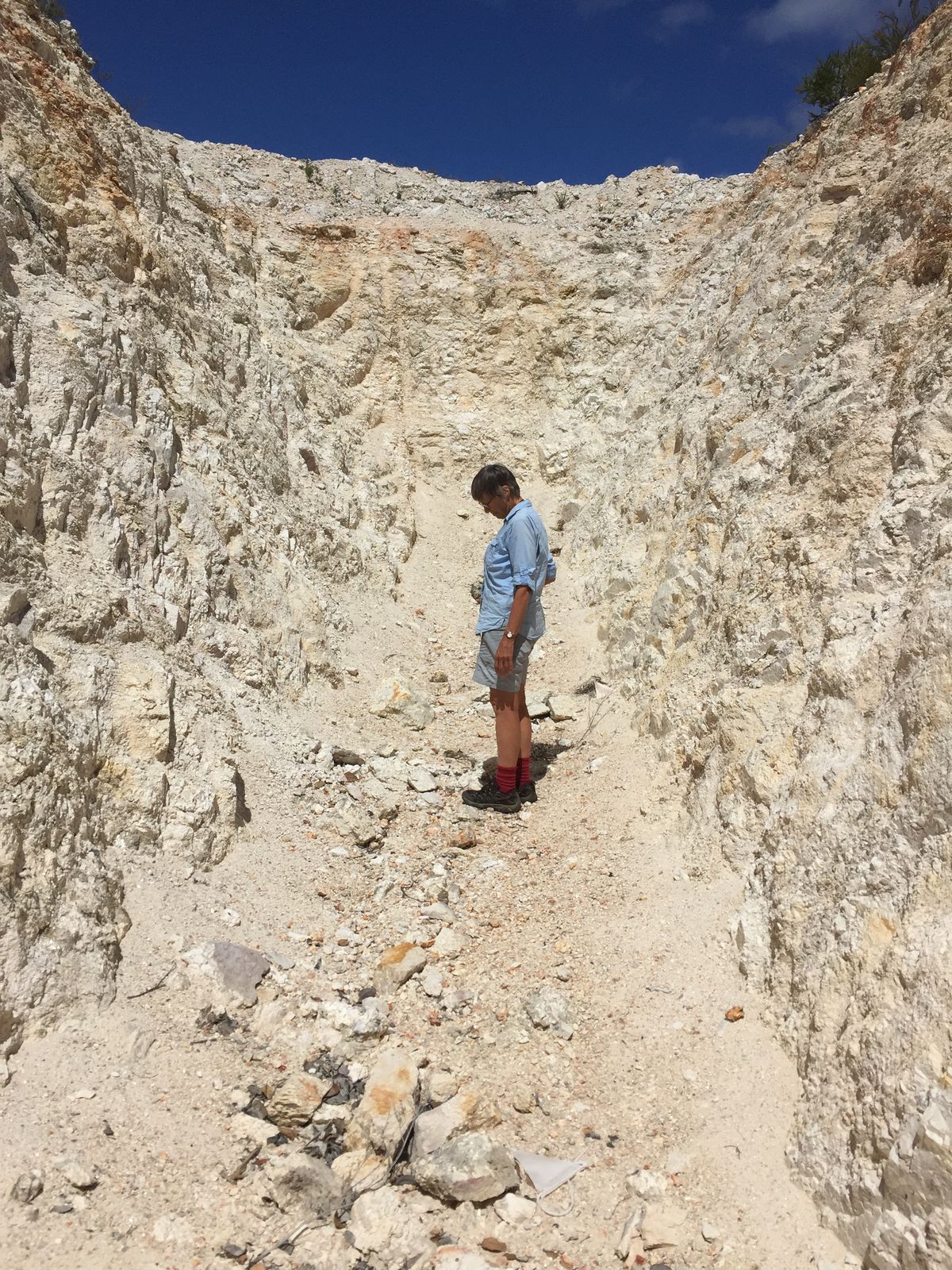 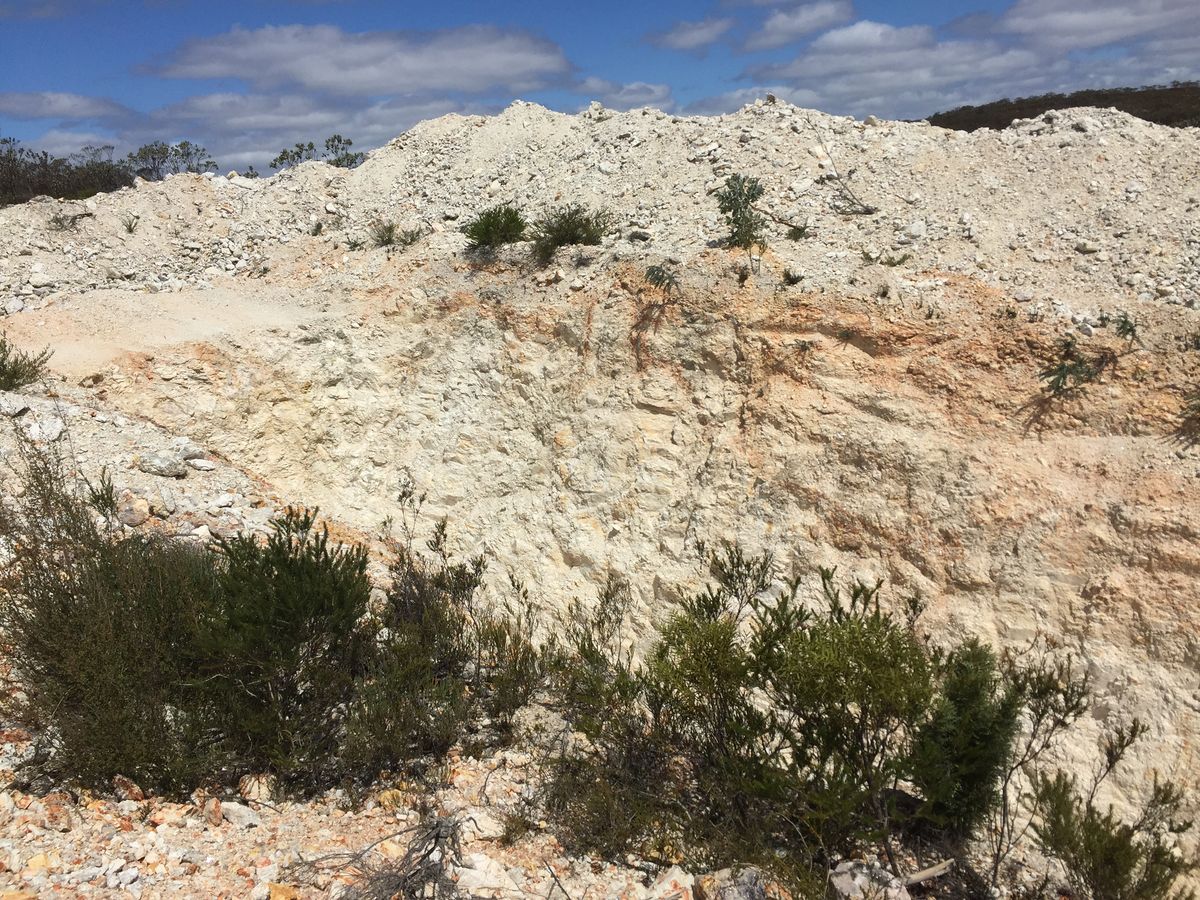 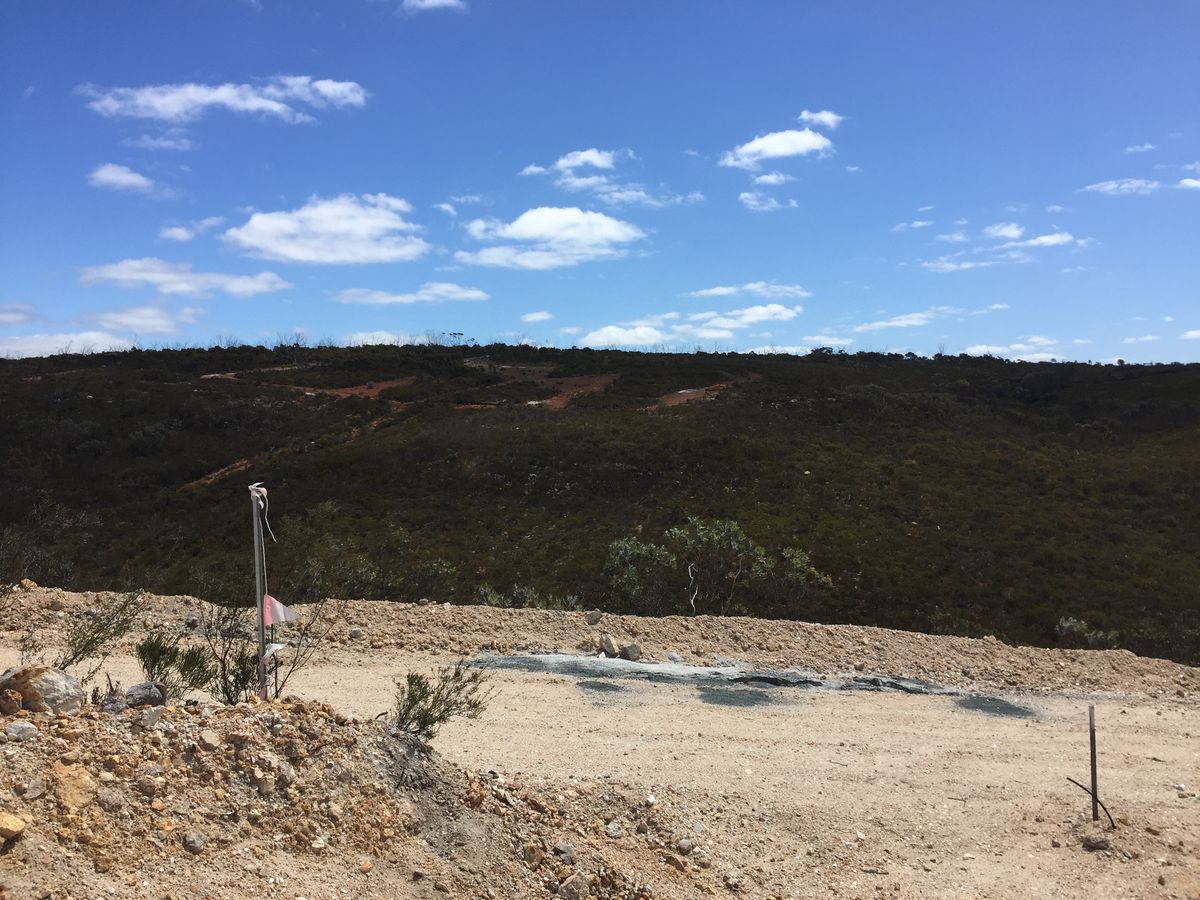 While this work is disturbing enough, the activity at the second site, “Deep Purple”, was what triggered the outrage that led to this campaign.

The Deep Purple site is in the midst of a stand of mature and majestic salmon gum – and therefore in the midst of a host of known Carnaby’s black-cockatoo nest trees. The exploration work in this area appeared to be in breach of the clearing permit conditions. Tracks were gouged deeply into the hillside, directly alongside nest trees, and work was undertaken in wet soil conditions. Images of some of this degradation can be seen in the "Exploration Gallery" below.

Investigations were undertaken at both the State and Federal level. Following the investigation by the Department of Mines, Industrial Relations and Safety (DMIRS), Lithium Australia was fined the sum of $35,874 for breaches of its Clearing Permit. On the other hand, the Federal Department of the Environment & Energy concluded that “the works to date are unlikely to have a significant impact on the Carnaby's Cockatoo. However, the Department has contacted the person taking the action to ensure they are aware of their obligations under the Act, and understands that they intend to refer all future action to the Department for assessment and approval under the Act.”

In June 2019 these tracks were rehabilitated by a local contractor, and the results can also be seen in the gallery below.

Information on the Lithium Australia website in June 2019 only provided outcomes of the Horseshoe site exploration – and this indicated that “assays failed to define any economic lithium mineralisation”. However, it was also indicated that further activity would be undertaken on the site in an attempt to “better quantify the nature of the mineralisation”. No information was provided regarding the outcomes of work at the Deep Purple site.

The Cocanarup Conservation Alliance Inc. is committed to ensuring that no further exploration takes place at either site – or at the Galaxy Resources site known as Baker’s Hill North-East (immediately adjacent to Deep Purple). This location – and Deep Purple – are particularly disturbing as they fall within one of the three most important nesting sites in the world for the Carnaby’s black-cockatoo. One of the primary goals of our campaign is to ensure that such a critical area for this endangered species is not put under threat by further exploration work.

Mining was at the heart of the early settlement of Ravensthorpe. The place was initially known as the Phillips River Goldfield after small quantities of gold was discovered in the late 1890s. Prospectors soon arrived at what became the Hawks Nest Camp, and by 1904 the first government smelter had become operational. Copper too, was mined and processed locally, especially in the Cattlin Creek. The main mines involved in this early period were situated in an arc to the north, east and south-east of the town – beyond the boundaries of the proposed Class A Reserve, as shown on the map below. 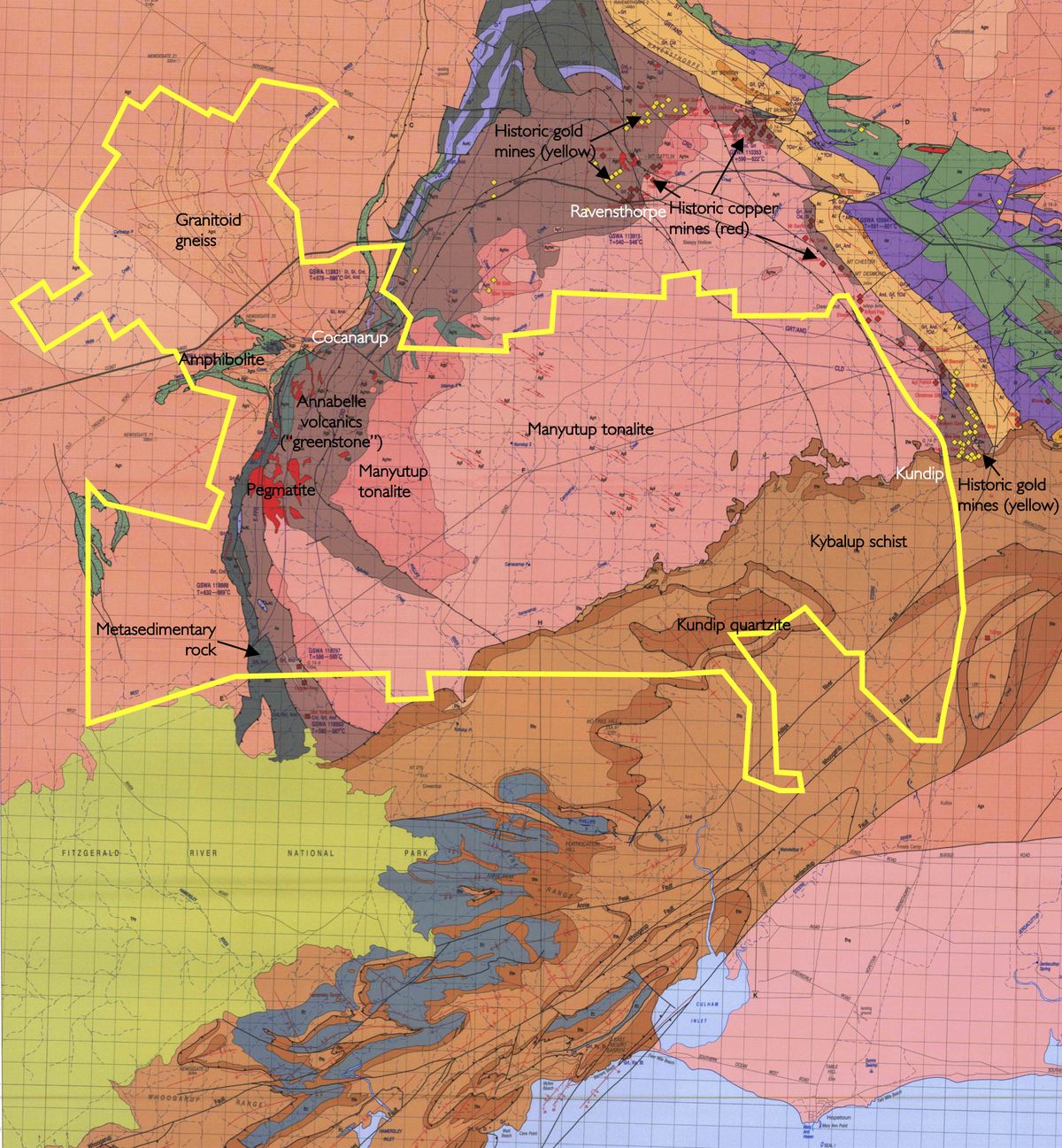 This map shows that all of the numerous historic mines in the Ravensthorpe region have been outside the proposed reserve area
Image by Jesse Brampton. Base map courtesy WITT, W. K.,1998, ‘Geology and mineral resources of the Ravensthorpe and Cocanarup 1:100 000 sheets: Western Australia Geological Survey, Report 54’

The population of Ravensthorpe and the goldfield peaked in 1911, when in excess of 2,000 people lived here, mostly associated with gold mining. Thereafter both population and mining activity declined rapidly, and despite brief flurries of activity around Kundip and Desmond in later years, the area never became a significant mineral producer.

Of interest is the very first gold discovered in the area, which was located on the Annabel Creek just north of the proposed Reserve (south-west of town) – this was found by James Dunn, one of the brothers from the Cocanarup Sheep Station, in 1898.

In 2004 BHP Billiton commenced construction of a massive lateritic nickel mine at Bandalup Hill, 35 km south-east of Ravensthorpe. This was officially opened in 2008, but soon ran into trouble and was sold to First Quantum Minerals in 2010. The local economy suffered a massive shock through this process, with approximately 1800 jobs being lost. First Quantum subsequently revamped operations at the mine and reopened it, with a workforce one-third of the original size. They have gone into “care and maintenance” at least twice since, with consequent roller-coaster impacts on the local community.

In 2009 Galaxy Resources opened its Mt Cattlin Mine on the outskirts of Ravensthorpe (just 2 km north of town), near the old Hawks Nest mining camp. This is a spodumene (or hard rock) lithium project, with processing undertaken onsite. It too, went into care and maintenance in 2013, again disrupting the local economy. It reopened in 2016 and, as mentioned above, is currently undergoing an expansion (in 2019), bringing both benefits and challenges for the local community.